The Joy and Pain of Worldwide Ecumenical Encounter 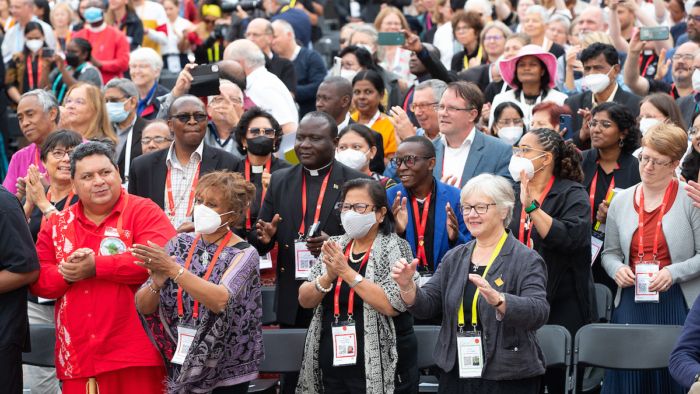 From 31 August to 8 September, I had the privilege of participating in the 11th Assembly of the World Council of Churches, held in Karlsruhe, Germany, as delegate for the Protestant Church in the Netherlands. It was great to see the important role of Sub-Saharan Christianity acknowledged in the assembly, not only in the significant number of African delegates, but also in the role of Dr Agnes Aboum from Kenya as the principal moderator and the presentation of Dr Jerry Pillay from South Africa as the new General Secretary.

It was a joy to celebrate the love of Christ together, which, according to the theme of the assembly, “moves the world to reconciliation and unity.” We experienced this unity as we sang together in many languages and worship styles, one evening led by oriental Orthodox chanting and the next evening by a worship band from a local Pentecostal church. It was evident that unity was not primarily found in the statements discussed in the meetings, but was embodied in encountering each other and celebrating together.

Yet, between the lines, we also sensed pain and division: in the search for the right wording for statements about the war in Ukraine, in which the voices of the Ukrainian and the Russian delegations were taken into account; in denouncing the injustice suffered by Palestinian Christians in a way that did not create unnecessary distance in the relationship with the Jewish community, which still suffers under the weight of the Holocaust. It became palpable when Rev. Henry Ndukuba, the Primate of the Anglican Church of Nigeria, critically questioned whether the WCC programmes around moral issues and the understanding of the missionary vocation of the church were not overly shaped by the interests of the headquarters in Europe. And why did the European war in the Ukraine take up so much more time than the wars in Africa and persecution of Christians in northern Nigeria and elsewhere? You could sense the pain in the resistance in the assembly when a representative of the German delegation took or was given more speaking time than others and churches from the South wondered whether some voices had more weight than others. These differences run deep. Do our sisters and brothers in Christ stand beside us in our struggles or do they leave us to ourselves? Does God accept me as I am including my sexual identity? Are my fellow Christians in European churches still willing to be guided by the Bible in their morality or are they carried away by their culture? Why do some Christians say they seek unity but can't celebrate the Lord’s Supper with me? What is our most important Christian calling in the world?

In the business meetings, that tension was regularly felt, but there was little time to hear each other's worries and pain. Outside of those meetings, it was much less visible. The plenary sessions were tightly choreographed and, as I understand it, more difficult voices were sometimes filtered out. The themes of the plenary meetings were strongly focused on questions around the struggle for justice, peace and wholeness of creation, but there was no attention given to the beautiful stories about healing, evangelism and church planting in India and South-East Asia that I heard about in the margins of the assembly. In the workshops, people mainly encounter those who already share the same passions and concerns. For real ecumenism, I think it is necessary to allow more room for contradiction, acknowledging differences and the difficult search for how we can still find each other – sometimes by finding a new way forward, sometimes by growing in mutual understanding, sometimes by recognizing that we need to repent.

We can of course only live with these painful differences if we continue to dig deeply into the source of our unity. In Karlsruhe, I was reminded of the German theologian Dietrich Bonhoeffer. In his Gemeinsames Leben or Life Together he said that a psychological or emotional experience of connectedness can be warm, but quickly falls short when our profound differences and all too human deficits become clear. We must therefore seek a unity in Christ that transcends what divides us as human beings. The warm feeling of celebrating together has great value, but should help us to deepen our shared roots in Christ. The theme of this assembly rightly points to the love of Christ as the source of unity and reconciliation. One of the delegates rightly argued that beyond an ecumenism of the heart, we also need an ecumenism of the Spirit. From that source we can hold out despite our differences and the pain they cause. This is the source of our motivation to keep looking for a deeper unity. I was touched and encouraged by Sister Blandine Lagrut of the ecumenical community Chemin Neuf in Paris, whom I met in my home group. She talked about how acknowledging the pain of division is part of their ecumenical spirituality. Every evening the members of this community pray:

You who prayed that all may be one

we pray to you for unity among Christians,

May your Spirit allow us to keep experiencing the pain of separation,

so that we acknowledge our guilt,

and that we may hope beyond all hope.