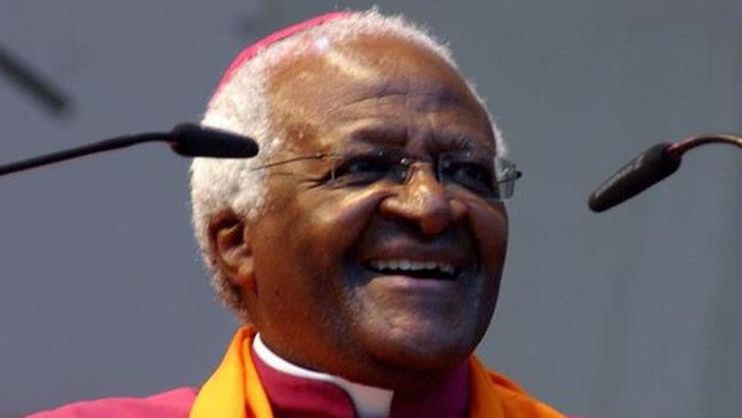 On Christmas Day 2021, South Africans woke with the news that our bishop has passed on. In no time, typical of the African storytelling tradition, stories about Bishop Tutu were all over the media. People from all walks of life shared their stories of how they met this loving, remarkable man. I will join this avalanche of endearing stories by sharing two, one before 1994 and one after 1994.

1986 was my second year teaching theology at Stellenbosch University. The university was an all-white, Afrikaans-speaking institution. The Faculty decided to do an “ecumenical tour” and visit “the other side” of our apartheid society to listen to them. At that time, the National Party government had a firm grip on the media. Nobody really knew what Nelson Mandela looked like, as no photos were allowed, or what he said… censorship was effective. Everything was in black and white. The choice was between Apartheid and evil communism.

The Stellenbosch Theology lecturers met with Bishop Tutu at the headquarters of the Anglican Church in Johannesburg. He was a bit late for our meeting and profusely apologised, explaining that his wife was sick. He was worried and we all felt his concern. Suddenly this fierce and fearless critic of the government, the apartheid system and the Dutch Reformed Church, was sitting with us and sharing as if we were family. He welcomed us as brothers (alas, 1986, no sisters) even though we were from an institution that played a role in the formulation of the apartheid dogma. He was talking to us as brothers in Christ even though he differed on fundamental issues with us. I wish we had a tape recording of that discussion. The “buts” and “explanations” from our side were met with biblical principles and with illustrations of the impact of apartheid on the voiceless majority of the country.
At the end of the meeting, two words can summarise my feelings for Tutu: “profound respect.” After that day none of those present could soft soap or defend apartheid. We knew it was wrong and humiliating to our fellow citizens. The meeting was one of the “tipping points” for our Faculty as well, and in the long run for our University. We began stepping away from the deeply engrained human tendency to only serve our group and ourselves.

The second story aims to illustrate the spirituality, call it the secret, of the integrity of Bishop Desmond Tutu. Anyone who read his No future without forgiveness (Doubleday, New York, 1999) or followed the work of Antjie Krog (Country of my skull, Random House, Johannesburg, 1998) will know that the work of the Truth and Reconciliation Commission, headed by Bishop Tutu, was crucial to the future of our country. It is, in fact, crucial to the future of the world. A friend of mine shared this story of what happened at George, a big town in the Southern Cape, where a series of TRC meetings were held.

One specific day, the afternoon session had to start – but Bishop Tutu was missing. When they eventually found him, he was sitting cramped up in a telephone booth praying. The need to spend time with God and be strengthened to endure the pain and emotions of the hearings, meant that he needed to spend that time with God in order to have the emotional and spiritual strength to guide the hearings.

Desmond Tutu knew and followed Jesus Christ in the community of the Trinity. His strength and vision, his message, his love and laughter, his tears and sorrow were imbedded in and flowed from the time he spent and the strength he received from being in the presence of God. He was an obedient servant that followed the Truth and was fearless in addressing what was wrong. He walked the talk. He crossed boundaries to “other sides” and in doing so, he set an example to all of us in Africa and in the world. We thank God for giving him to all of us.

Jurgens Hendriks is Emeritus Professor of Practical Theology and Missiology at the Faculty of Theology at Stellenbosch University in South Africa.