The Shepherds in Ethiopian Art 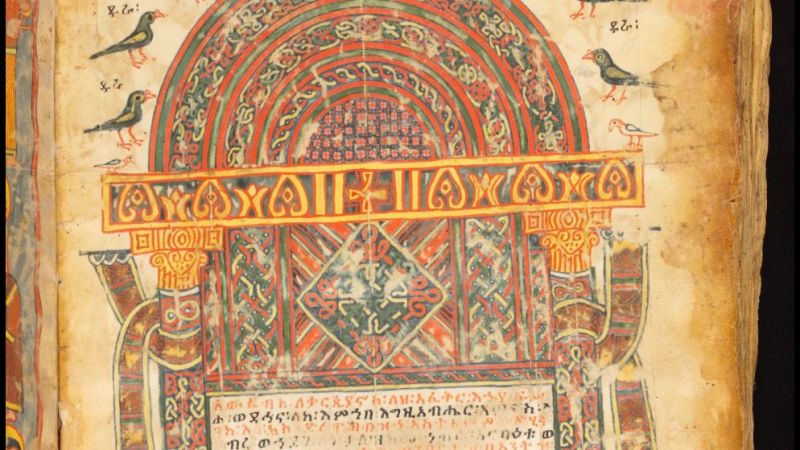 While doing research on Ethiopian Hermeneutics for the Biblical Hermeneutics encyclopaedia article, I came across a number of websites with valuable primary and secondary resources. Recent interest in the digital preservation of Ethiopian manuscripts has led to copies of paintings that were previously inaccessible being made publicly available for the first time.

These depictions of the Nativity are part of an illuminated manuscript of the Four Gospels that was created at Dabra Hayg Estifanos monastery in the Amhara region of Ethiopia. What is fascinating about the paintings is the way they draw on Byzantine models and transform them into an Ethiopian idiom. The portrayal of the shepherds is of particular interest in this regard. 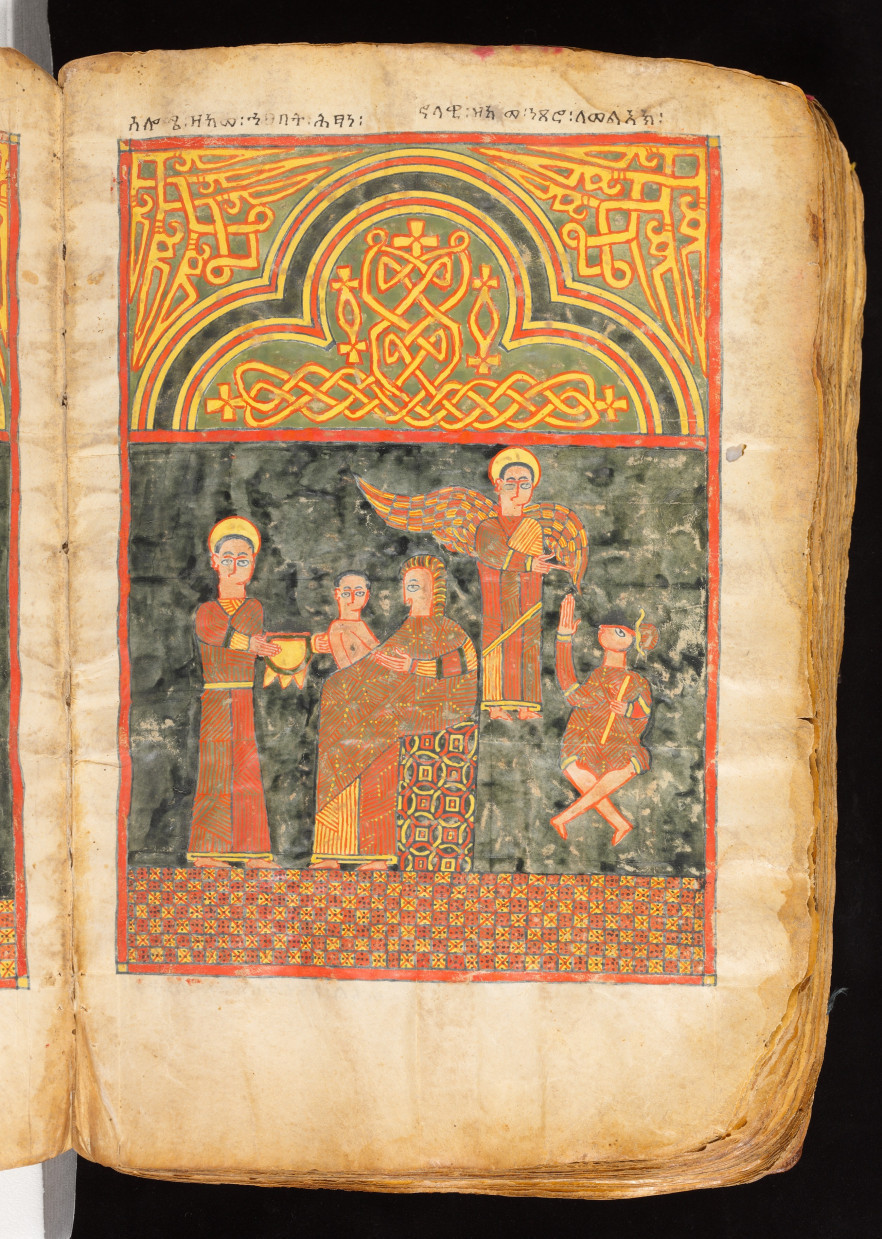 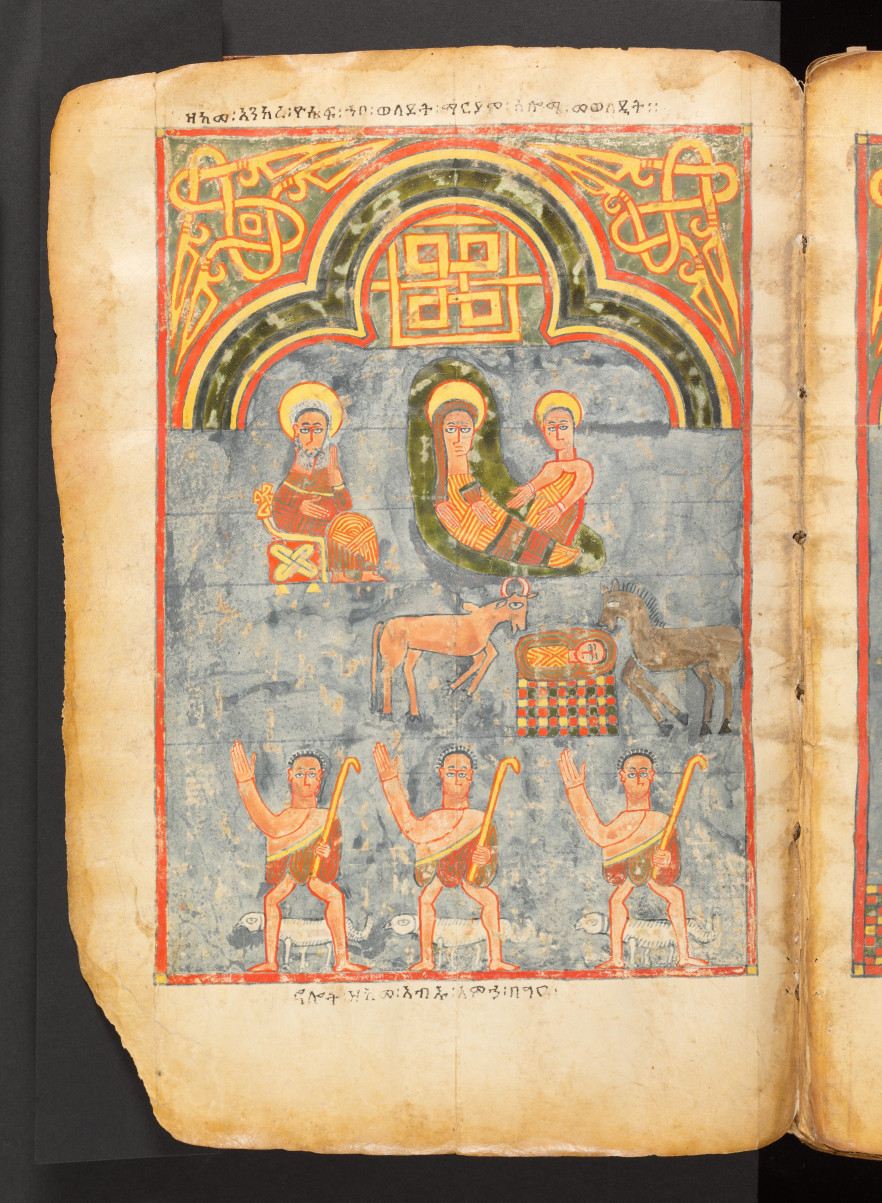 Fortunately, there are useful secondary resources available to help interpret these paintings. Issues of the Journal of Ethiopian Studies from 1963 to 2016 are now freely accessible by subscription from JSTOR. Prof. Stanislaw Chojnacki, who co-directed the journal from 1963 to 1975 and has published extensively on Ethiopian art, has also written an article on the subject of the Nativity. As he observes in his analysis of several Gospels, "the announcement to the shepherds by the angels, and their subsequent homage paid to the Child born in Bethlehem, have been represented either together or singly. In the post-iconoclastic Byzantine schema the announcement by the angels was generally shown, the angels appearing behind the top of the rock to the shepherds, who were placed below, on the right of the composition" (Chojnacki 1974, 19).

The illustrators of the Dabra Hayg Estifanos Gospels have chosen to represent the announcement to the shepherds and the shepherds' journey to or arrival at Bethlehem separately. In the former, they follow the Byzantine model in terms of placement, but portray the shepherd quite realistically. He is well-wrapped, wearing a coat and a hat. His right hand is raised in surprise. His crossed legs and the pipe in his left hand suggest that the angel has just interrupted a musical reverie. In the latter, three shepherds are depicted, accompanied by three sheep. The shepherds are bare-headed and wear a kind of skirt. They are shown with their legs stretched wide, striding along at a fast pace. Each has his right hand raised in a greeting and holds a curved stick in his left hand.

As Chojnacki suggests, "In Ethiopia, largely composed of a pastoral society, the subject of the shepherds no doubt struck the imagination of the painters. This is possibly the reason why it occupies such a prominent place in the composition, the shepherds' figures having the same size of main personages. Also the shepherds seem to be portrayed from life and wear local dress, while other figures seem rather to reflect foreign influence. In the Hayq Nativity the shepherds wear short decorative skirts, are barefoot and hold curved sticks. In the Zir-Ganela Nativity the very crude execution does not allow clear observation of particulars of the dress; nevertheless the shepherds have the same curved sticks as in the Hayq Nativity, and additionally perhaps an intriguing head-decoration. It is however possible that the "head-decoration" represents the way of drawing hair, as in Däbrä Mar Gospels in which several figures have their hair drawn in "Afro" style. The same realistic approach is obvious in the Faras Nativity: two shepherds stand with one of their legs crossed, supporting themselves on a long stick, a position of relaxation still used by Nilotic pastoralists" (Chojnacki 1974, 21).

Later paintings go even further, portraying the shepherds as playing "a kind of lawn hockey." As Chojnacki explains, "Gänna is a popular game traditionally played in Ethiopia at Christmas-time and therefore called by the same word as Christmas, gänna." (Chojnacki 1974, 40-41). How this folklore addition came to be taken up in Ethiopian depictions of the shepherds is unclear, but he suggests that "in the basically pastoral society, in which most young people were engaged in watching cattle, since practically every male was a shepherd in the early stages of his life, the narrative of the Gospels indicating that the shepherds were the first to be informed about the birth of the Saviour must have had a special appeal." (Chojnacki 1974, 41). According to Chojnacki, "One of the justifications still repeated by traditional scholars is the belief that the shepherds were indeed playing gänna at the very moment when the angel appeared to them" (Chojnacki 1974, 41-42).

Chojnacki's interpretation is compelling and offers an interesting perspective on the inculturation or contextualisation of the Gospel in Africa. Much discussion has focused on the portrayal of Jesus. (Is it justified to portray Jesus as an African? What aspects of the Gospel message are better communicated by doing so? What aspects are less well-communicated?) But the people who hear about Jesus and come to him are also important because they represent us and our response. In Ethiopian portrayals of the Nativity, the shepherds run to see the saviour. Do we?

Samuel K. Bussey is a doctoral student in Intercultural Theology at the Protestant Theological University in Groningen, the Netherlands.

"Eusebian Prologue I"; "The Nativity" and "The Annunciation to the Shepherd and the Christ Child's First Bath", "Illuminated Gospel [late 14th–early 15th century]," The Met, accessed 31 March, 2021, https://www.metmuseum.org/art/collection/search/317618.