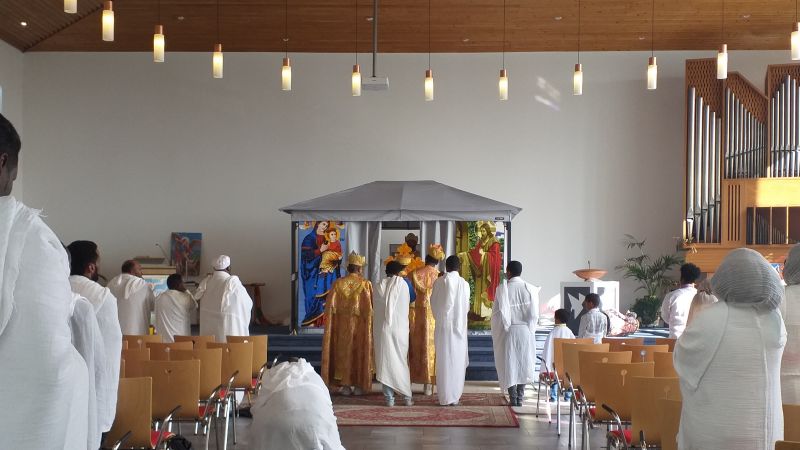 Earlier this year, I had the privilege of attending a service held by the Eritrean Orthodox Tewahedo Church in Wezep. The church mainly consists of Eritrean migrants who have recently arrived in the Netherlands as refugees and has been meeting regularly since December 2017. I was invited by a family who were having their fourth child baptized.

To my surprise, the service turned out to be a four-hour long regional gathering that not only included the baptism of several babies, but also multiple sermons, holy communion and even a wedding. Unfortunately, I speak neither Ge’ez, the ancient liturgical language, nor Tigrinya, so my experience was more that of an observer than a participant. Eritrean migrants in the Netherlands tend to have less formal education than those from Syria and I met no one who could speak English. The younger people, who can often speak Dutch quite well, were not available to help me. Still, during the service it was clear that I was encountering a very ancient African Christian tradition.

The service took place in a modern Protestant church, but the community had adapted it for the occasion. The liturgical centre was a garden tent from a local DIY chain, which provided a space where the priests and acolytes could withdraw. In the tent was a suitcase that held crosses, chalices and many liturgical robes. The whole community was dressed in white. The language, the chanting, the incense, the music and dancing all breathed venerable traditions, though combined with a certain freedom that allowed a small child to run forward to her father performing his duties.

The service was a good illustration of the portability of Christian tradition. These ancient African Christian practices had travelled with their communities all the way from the Horn of Africa to Northern Europe. Furthermore, it was a good reminder of the multicultural nature of global Christianity and the contextuality of Dutch expressions of Christianity, which only arrived in the Netherlands centuries after it had been well established in Eritrea. I could see how it supported this community uprooted through political upheaval. Many arrived in the Netherlands after an arduous journey through Ethiopia, Sudan, Libya and across the Mediterranean that could take over a year. They were thankful that God had carried them through it all, but they also needed the comfort of the Christian traditions they knew, just as migrants from my own country to Canada continue to use Dutch reformed liturgies.

Speaking to some of the young men at the baptism party that followed, I realized that more was needed than a weekly chance to immerse oneself in the liturgies from home. The older generation of refugees may only partially integrate in the Netherlands and may always understand themselves primarily as displaced persons with an Eritrean identity. The schoolchildren, on the other hand, are adapting fast, translating both language and culture for their parents. Young adults are working hard to become part of this new world, taking courses, starting jobs, making new friends, and slowly starting to feel at home. This new world will never be entirely who they are, but they keep moving between the old and the new, the traditions from their Eritrean farming communities and the jobs they now have here driving delivery vans, caring for the elderly and restocking supermarkets. Will their Christian faith in this context merely belong to their Eritrean identity or can it be carried with them to the parts of their lives that are growing outside this subculture?

In intercultural theology, we have become aware that we need to move beyond the expression of contextual theologies to intercultural theological reflection. In the context of globalization there is a pressing need for the church worldwide to become more catholic and this requires theological reflection that draws from different cultural contexts. The experience of Eritrean children and young adults in the Netherlands suggests that we also need intercultural expressions of church, of worship and fellowship. Such expressions should allow the believers to relate their faith to the different parts of their lives and mediate between them. If our identities are constructed in different cultural contexts, we can only relate Christ to our whole existence if we learn to follow and worship him in the different cultural languages that we speak. Otherwise, Christ could easily become a relic of a past that will fade way as Eritrea – or the period of Dutch history in which my own church traditions were formed – becomes increasingly distant.